Originally the Ballroom was the Stanford entrance hall with additional bedrooms situated above. In 1745, following the construction of the Stable Courtyard, the fifth Baronet commissioned Francis Smith’s son, William to increase the height of the room, removing the bedrooms above and introducing the ornate coved ceiling. The resulting Ballroom is a beautifully proportioned room.

The majestic ballroom has a frescoed ceiling of Roman mythological hunting scenes, surrounded by portraits of the Stuart Kings of England and Scotland. 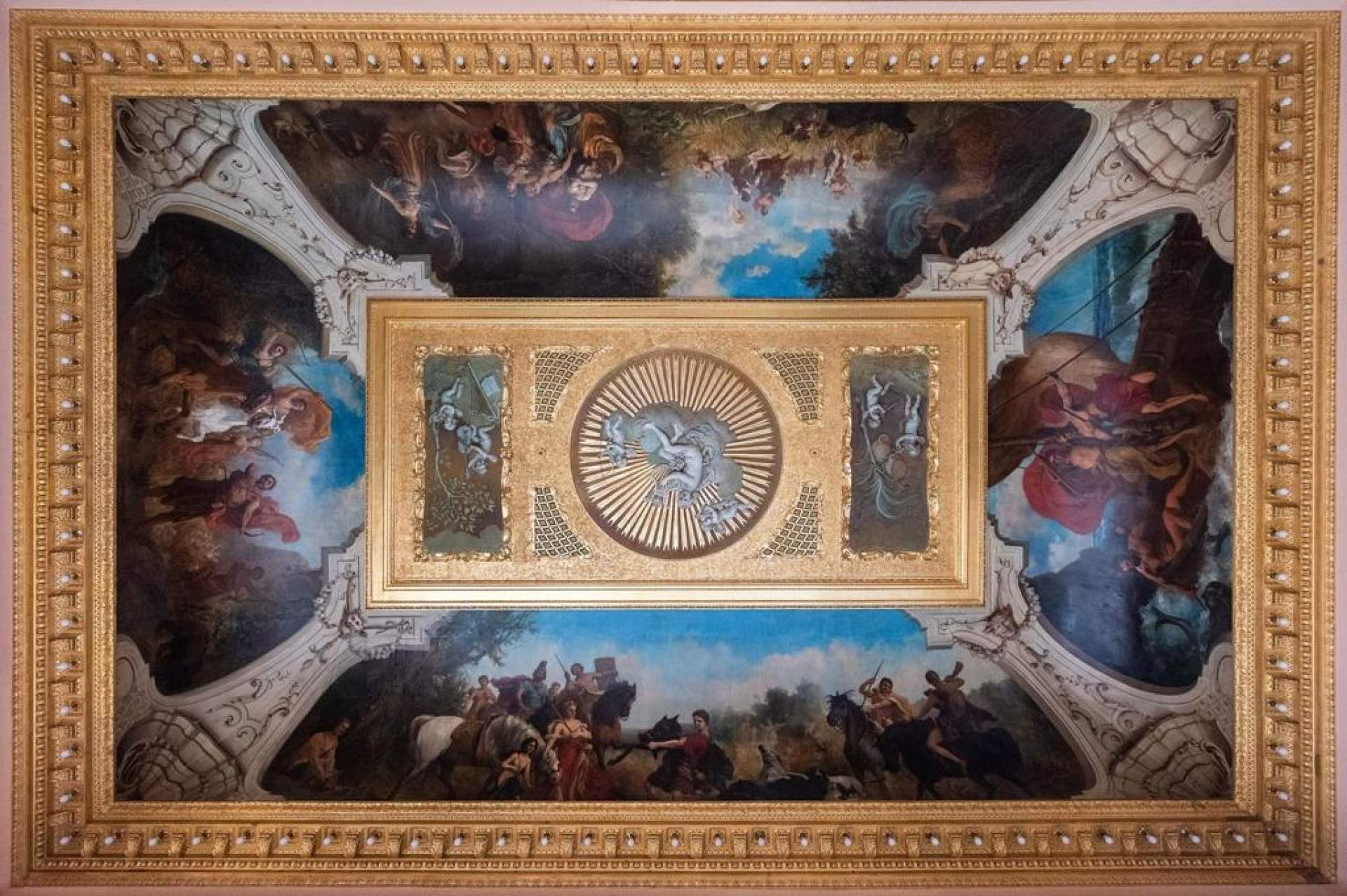 This alteration brought to completion the collaboration between three succeeding members of the Cave family and three generations of ‘Smiths of Warwick’ building and embellishing the house. The beautiful ceiling was restored in 2013 by Hirst Conservation, generously funded by the Country Houses Foundation under the guidance of Norman Hudson. The central ceiling panel depicts Apollo in a sunburst and dates from the original period, as do the four `trompe l’oeil’ shells at the corners. The four painted panels, depicting various hunting scenes, were added by Felix Joubert when the house was restored for the 5th Lord Braye in the 1880’s.

Most of the portraits in this room originally belonged to Henry Stuart, Cardinal Duke of York, who died in Rome in 1807. In 1842 they were purchased by Sarah, Baroness Braye, who was wintering in Rome with her daughter Catherine. An exceptional portrait is that of the Cardinal’s older brother, Prince Charles Edward, the Young Pretender, by Laurent Pecheux (1729-1821). This was the last major portrait of the Prince painted in 1770, when he was fifty. It shows him wearing his arms and armour given to him by a distinguished group of Scottish nobles, led by the Duke of Perth to wear in Court whilst in exile. In the background of the portrait his victory at Prestonpans is depicted. 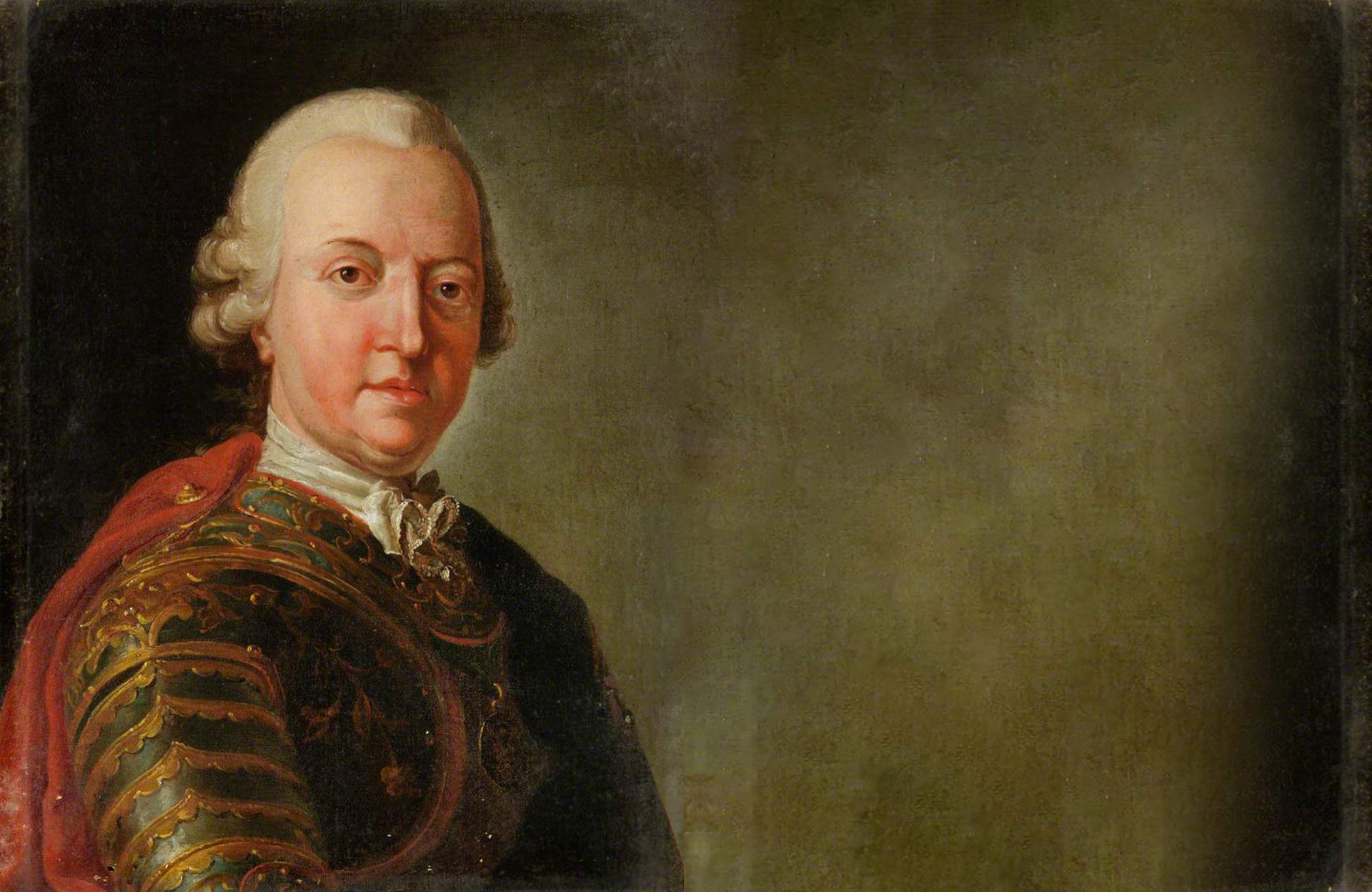 On either side of the main door are portraits King James III the Old Pretender, and his wife, Maria Clementina, granddaughter of the King of Poland. Next to the fireplace is a portrait of George Villiers, 1st Duke of Buckingham, as Lord High Admiral and to the right is King Charles II by Sir Peter Lely (1618-1680,) painted in about 1665. You will see several other portraits from the ‘Stuart Collection’ elsewhere in the house. One of the display tables presents Stuart memorabilia, including the Cardinal’s spectacle case and a miniature of Mary Queen of Scots, which originally belonged to her mother-in-law Marie de Medici, Queen Dowager of France.

The large portrait next to Bonnie Prince Charlie, is of Viscount Fermanagh, father of Margaret Verney who married Sir Thomas Cave, the third Baronet. Sir Thomas and Margaret were the first people to inhabit the new Stanford Hall, built by his father Sir Roger who had furiously objected to their marriage. The marriage was, however, a very happy one and the young couple’s affectionate relationship with her family is demonstrated by the warmth of correspondence between them. Sir Roger’s objections were entirely based on Margaret’s lack of fortune, but it so happened that she brought to the family the right to inherit the Braye peerage.