This was the family dining room until the Second World War. The family now use a smaller room which is only occasionally open to the public.

A charming painting by Adrian, 6th Lord Braye of himself with family members in uniform, proposing a toast in this room during World War 2, is displayed in the right hand cabinet.

There are several recently restored Tudor portraits, which illustrate the eminence of Sir Reginald Braye at the Court of King Henry VII as Chancellor of The Duchy of Lancaster and Privy Councillor. Over the fireplace is an interesting portrait of Margaret Beaufort, mother of Henry VII, who married Edmund Tudor whose portrait hangs at the far end of the room. An unusual picture, painted some hundred years after the event, shows the marriage of Henry VII to Elizabeth of York, sister of the murdered Princes in the Tower, which ended the Wars of the Roses. Sir Reginald, who was much involved in the arrangements for the marriage, stands behind the King alongside Bishop Morton.

Between the display cabinets is a portrait of a 17th century Dutch lady. Until 1994, the sitter masqueraded as Elizabeth of York, clothed in ermine and jewellery, her unaltered face framed in a Tudor headdress. The three photographs beneath show the process of restoration to the original portrait. We can only suppose that Sarah, whose interest in the Tudor Court was known, had been misled by the art dealer!

The Old Dining Room, Wars of the Roses, Tudor King and Queen and family costumes. 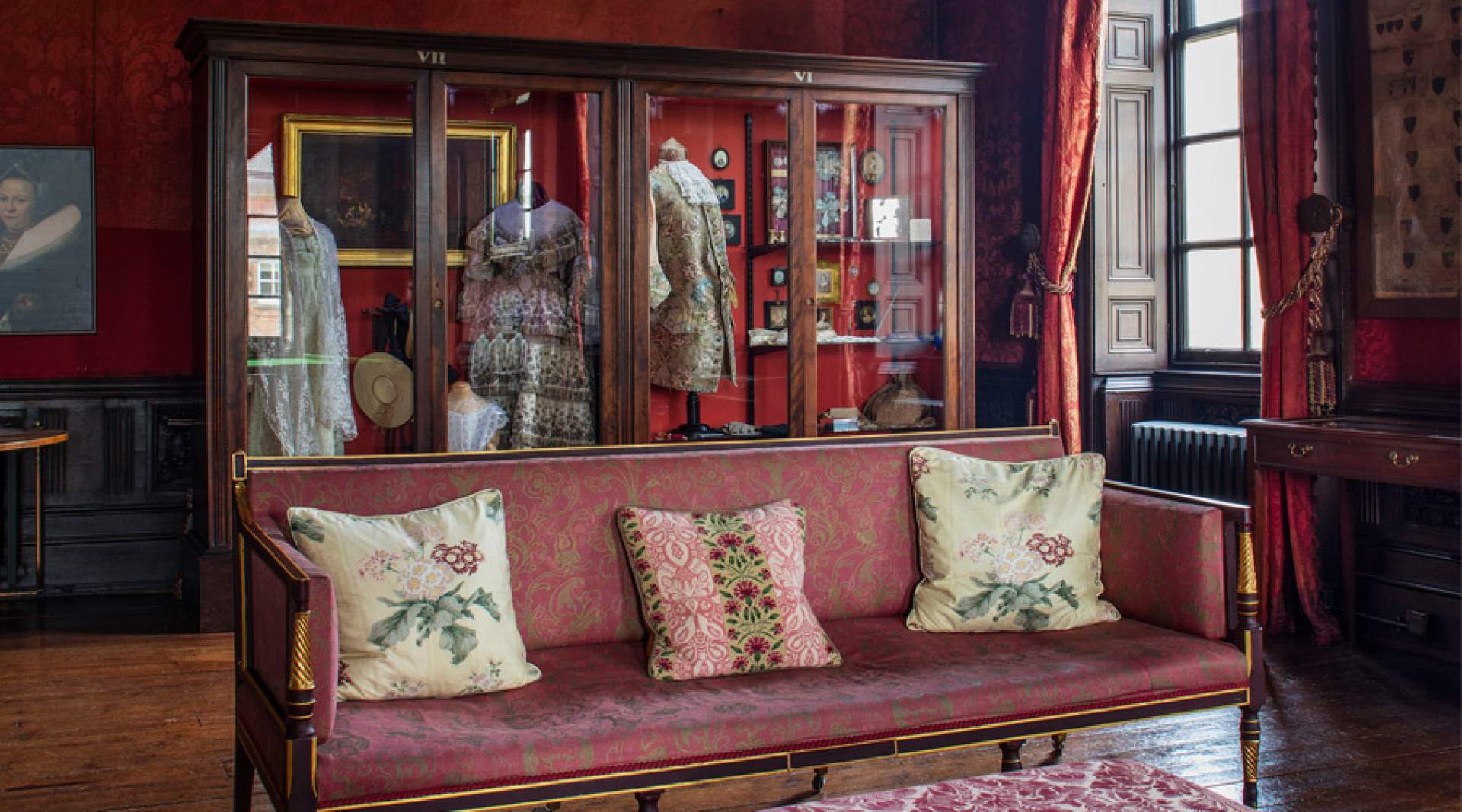 The handsome Portuguese chest, the refectory table and the 17th century chairs came from the original Manor House. The 18th century election chair was used by the 5th Baronet after his successful campaign in Leicester. The right hand cabinet displays many items of family clothing, including a fine embroidered nightcap, c.1610, worn by Sir Thomas whose portrait hangs above, a Queen Anne child’s coat worn by the 4th Baronet, two waistcoats belonging to the 5th Baronet and a ball dress belonging to Sarah.

The left hand display cabinet holds family military items including Edmund Wyatt-Edgell’s 17th Lancer Uniform and his sword, which previously hung in St George’s Chapel at the request of Queen Victoria. There is a collection of Gurkha Kukri service knives belonging to Nick Fothergill, from his service with Queen Elizabeth’s Own 6th Gurkha Rifles in Hong Kong in the early 1990’s, where he was seconded from The Royal Marines. The Naval hat, sword and epaulets, belonged to Nicholas’s grandfather, Captain H M Fothergill RN who served as the Commander of HMS Marlborough in the Battle of Jutland in 1916, who helped save the Russian Royal Family from Sevastopol from the Revolution in 1919 and famously kept Bruno, the Russian Bear in his cabin.