In 1730 Sir Verney Cave commissioned Francis Smith to build this lovely staircase which is cantilevered and needs no additional support. The iron posts were only added as a precaution when the house was first opened to the public in the 1950’s. The walls are adorned with family portraits capturing the Cave family custodianship across the generations alongside other portraits of connected dignitaries. Facing the bottom of the stairs is Sir Verney who died aged twenty-nine. On the first flight of stairs are portraits of the Archduke and Archduchess of Austria after Rubens, purchased by Sarah from the collection of the Duke of Alba in Madrid. In the centre of this wall is Sir Roger Cave, 2nd Baronet who lived in the Manor House on the other side of the river, who married Margaret Cecil, sister of Lord Burleigh and who commissioned the Hall and sadly died later that year. The pair of pictures of the Sir Thomas, 3rd Baronet and Margaret Verney were painted at the time of their marriage in 1703. They were the first to move into Stanford Hall and the young couple’s arrival at The Hall was greeted with great joy by the neighbourhood. Sir Thomas wrote to his father-in-law, Lord Fermanagh in May 1704: “...We were received with extreme Civility from all our Neighbouring Counties, meeting I believe with between 500 and 600 Men and wonderful Treats of Sweetmeats and Cool Tankards by the Way”. Margaret adds: “The Country has been extremely civil and shows abundance of Rejoyceing and respect at our comein & several comeing to meet us and the bells ringing at every town we came thro’...”.

On the same wall is another portrait by Cornelius Johnson of Lady Berkeley, formerly Dorothy Cave, sister of Sir Roger, 1st Cave Baronet. Below her is Sir Thomas, the 5th Cave Baronet who succeeded his brother Sir Verney and was MP for Coventry and Leicester; it was he who commissioned William Smith the Younger to build the Stable Courtyard and commissioned the ballroom. On the second flight of stairs the most interesting portrait is of Sir Thomas Cave, the 1st Baronet who was a staunch Royalist during the Civil War. Together with his father (also Sir Thomas) he resisted a Parliamentarian visitation to both the Manor House and Church after the Battle of Naseby. He was to be seen standing on the roof of the house brandishing a fowling piece, surrounded by men armed with muskets and villagers armed with forks and staves, the bells ringing. As a result of this spirited display Sir Thomas was imprisoned in Northampton Castle for two years, although after the Restoration he had the satisfaction of imprisoning the man who had arrested him. He became High Sheriff of Leicestershire and Deputy Lieutenant for Northamptonshire. The portrait by Hudson is of Lady Wray who was a relative of the wife of the fifth Baronet.

The Flying Staircase lit by a crystal French Empire chandelier. 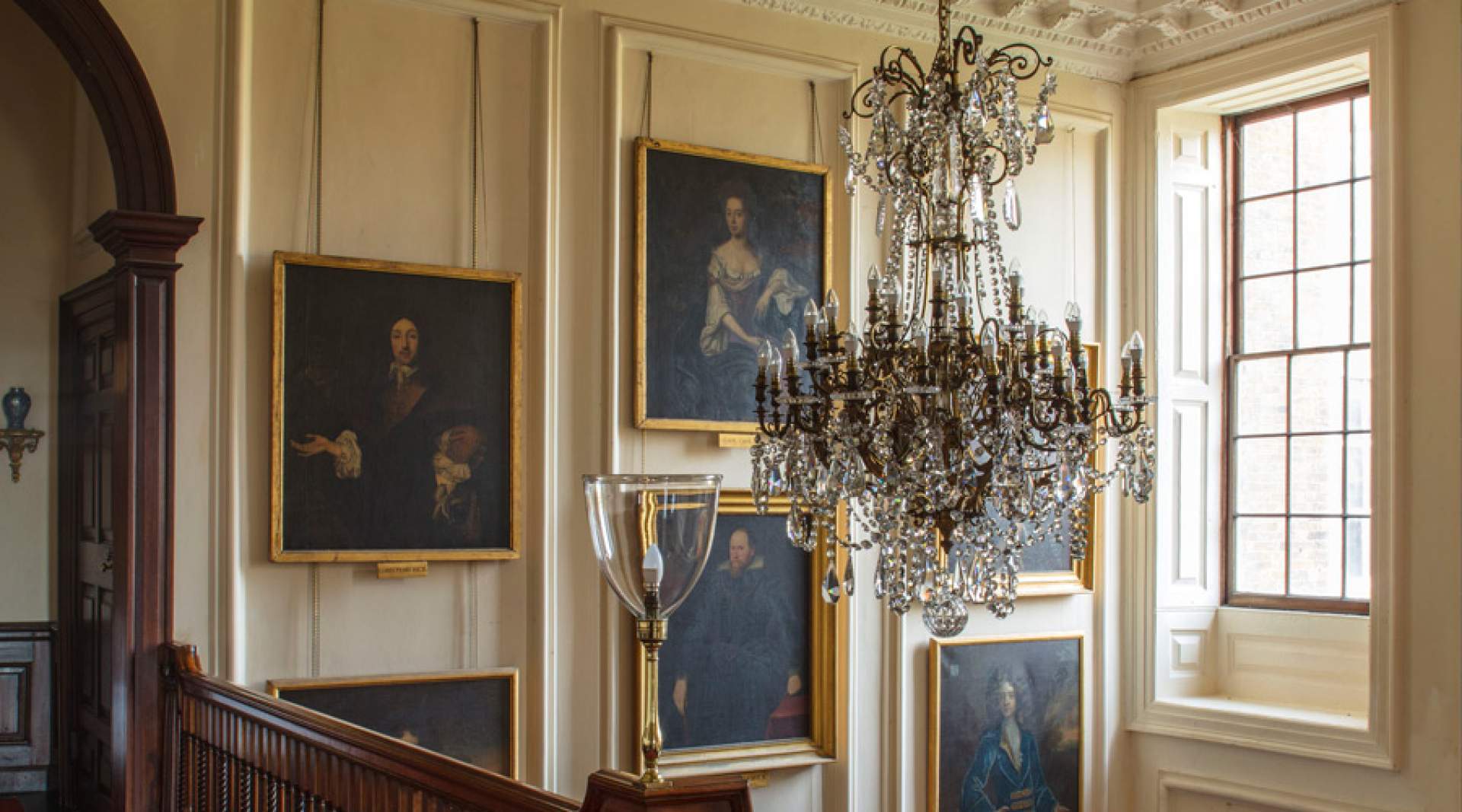 Notable amongst pictures on the third flight is Sir Ambrose wearing the Queen’s garter, below him is another Ambrose Cave, the brother of Sir Roger who built Stanford. A Brigadier in The Life Guards, he was dramatically murdered by a fellow officer who ran him through with a sword as he sat peacefully at cards. The murderer, whose life Ambrose had previously spared in a duel, then vanished, never to be seen again. To the right is a portrait by Robert Peake the Elder of a sixteen year old boy in the Cave family, wearing a splendid embroidered jacket with a pearl favour around his arm. This is possibly Richard Cave, elder brother of the last Cave Baronet whose portrait, by Geerhaerdts, is on his left. Richard was a brilliant young man who died in Padua aged nineteen and his body was placed into the Adriatic by his friends to avoid his being burned as a heretic. The chandelier is French Empire.

Facing the top of the stairs is a set of four portraits of the children of Sir Roger Cave including his oldest son who became the 3rd Baronet and his second son Charles who drowned in the great storm of 1703 as a naval officer on board the Newcastle which broke up off the Sussex coast. Queen Anne called a day of National Mourning after this storm which wiped out one third of the Royal Navy and devastated the ports of both London and Bristol.